At first blush it may not be apparent that a mark registered for a local beer could be the basis of a successful opposition under Article 8(5) of Regulation 2017/1001 for an identical mark for casino and gaming items.  This General Court decision is interesting in that it demonstrates the potential scope of this ground of opposition even where the earlier mark is not a “famous” mark.

The applicant, Novomatic AG (“Novomatic”), filed an application for registration of an EUTM for PRIMUS in class 28 for a wide range of goods relating to casinos and gaming machines.  Brouwerij Haacht NV (”BH”) opposed the application on the basis of its prior Benelux registration for PRIMUS in classes 32 and 33 for various beverages including beer and wine and also on the basis of its EUTM for PRIMUS in class 32 for beer.  It relied on likelihood of confusion under article 8(1)(b) and upon Article 8(5), namely that the mark applied for would take unfair advantage of or be detrimental to the distinctive character of its PRIMUS mark.

Novomatic asserted firstly, that the Board took into account evidence of use of BH’s earlier marks that did not relate to the earlier marks as registered but to other forms of those marks.   The evidence showed that BH’s mark had been used on its own but also as PRIMUS PILS and in two combined word and logo marks, one of which is shown below: 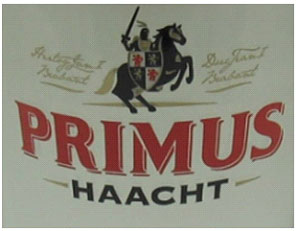 Secondly, Novomatic claimed that the Board had based its assessment of reputation upon presumptions and probabilities.   The General Court reviewed all of the evidence of reputation submitted by BH and found that its marks did enjoy a sufficient degree of reputation in Belgium in relation to lager beer.  Interestingly, the Court noted, following fairly recent precedent acknowledging that reputation is acquired progressively, that documents may retain a probative value even after the relevant date of application if they enable conclusions to be drawn concerning reputation at the application date.

Novomatic argued that the Board had established a link between the marks based on supposition and not on the evidence.  It said that even if it is possible to find gaming machines in bars or establishments in Belgium, the Board’s assessment disregards the fact that the goods at issue have different final consumers, namely either owners of bars or establishments or consumers of beer.  It also tried to argue that the gaming sector is a regulated sector whose exercise is subject to authorisation by the issue of a licence and that the relevant public would not make a link between products under public licence and beer.

The General Court rejected Novomatic’s submission that the final consumers of the relevant goods were different.  It found that there was an overlap in the public concerned by the goods, namely the professional public who purchase beer for their commercial establishments and who may also have gaming machines on their premises.  It found that the attention level of this public would be high and went on to analyse whether this public would make the relevant link for the purposes of Article 8(5).

While acknowledging that lager beer is not directly related to casino-based items, it found that there is a link between beer and entertainment services because of their complementary nature and the fact that many pubs also feature gaming machines.  It also found that considering the reputation of the earlier marks for lager, the professional public could make a link between the respective marks in the event of their purchase of a gaming machine.

In summing up, the General Court noted that the respective signs were identical, that there was an overlapping professional public and although the goods were of a different nature, that the relevant public would be likely to make a connection between the goods.  Even though it found that the strength of the reputation of the earlier marks was average, it also found that they had acquired a distinctive character at least through use.  As a result, the Court held that there was a risk that the relevant public would associate the marks and rejected Novomatic’s argument that there was “due cause” for its use of the PRIMUS mark whether because the mark was a laudatory, or because it referred to the black knight in the combined word/logo mark.  Novomatic’s appeal was rejected on both counts and it was ordered to pay costs.

This article first appeared on WTR Daily, Part of the World Trademark Review in October 2020. For further information please go to www.worldtrademarkreview.com